Auburn's historic Toomer's Corner oaks poisoned with herbicide, likely to die...now this is some really SAD NEWS for all of us in the AUBURN FAMILY! Who in the world would be sooooo cruel and stupid to do such a thing because their team lost a FOOTBALL GAME? Sometimes I feel really sad in this world that we live in...some people really need to get a life and grow up! What will they do next...set our stadium on fire? These trees are so SPECIAL to sooooo many people...it's a tradition that we LOVE...I know some people find it silly, but we the Auburn family don't...we LOVE our Toomer's Oaks! I sure hope they find the person or persons that did this and that jail time will be in their future. We the AUBURN FAMILY will be okay because we are "ALL IN" and always will be...WAR EAGLE!!!! This is an article from AL.com...read it to find out more about what happened and why we are all so sad.

AUBURN, Alabama – Auburn University today confirmed that an herbicide commonly used to kill trees was deliberately applied in lethal amounts to the soil around the Toomer’s Corner live oaks on campus, and there is little chance to save the trees.
The trees are the traditional gathering place following a major sports victory. Auburn Tigers fans festoon the trees with toilet paper as a jubilant sign of Auburn pride. Most recently, of course, it was the scene of celebration for Auburn's victory over the Oregon Ducks in the BCS National Championship game on Jan. 10.
The city of Auburn Police Division is investigating the situation, and the application of this herbicide, known as Spike 80DF, or tebuthiuron, is also governed by state agricultural laws and the Environmental Protection Agency.

The university does not use Spike herbicide, officials said. Officials did say there is no reason to suspect any human danger from the herbicide, which manufacturer Dow Chemical says should be applied with proper clothing protection; a typical use of the herbicide is to kill trees along fence lines.
The university learned that a caller to The Paul Finebaum Show, a nationally syndicated radio show based in Birmingham, on Jan. 27, claimed he had applied the herbicide. As a precaution, soil samples were taken the next day and sent to the Alabama State Pesticide Residue Laboratory on campus for analysis. Due to a small fire that occurred in the Alabama lab in December, the tests were sent to the lab at Mississippi State University in Starkville, Miss., to expedite results.
For updates on the Toomer's Corner oaks
Auburn University has set up a website to follow information about the historic Toomer's Corner oaks.

Listen to the Jan. 27 call to The Paul Finebaum Show on the radio program's website.
Officials said in a news release that the lowest amount of the poison detected was 0.78 parts per million, described by horticulture experts as a “very lethal dose.” The highest amount detected was 51 parts per million, or 65 times the lowest dose. Experts believe a normal application by itself would have been enough to kill the trees, which are estimated to be more than 130 years old.
“We are assessing the extent of the damage and proceeding as if we have a chance to save the trees,” said Gary Keever, an Auburn University professor of horticulture and a member of Auburn’s Tree Preservation Committee. “We are also focused on protecting the other trees and shrubs in Samford Park. At this level the impact could be much greater than just the oaks on the corner, as Spike moves through the soil to a wide area.”
Additional tests are being completed to determine the movement and extent of the area affected, Keever said.

The removal process involves digging trenches and applying activated charcoal to absorb the herbicide from the soil and block its progress. A representative from Dow Chemical, which manufactures the herbicide, is advising the university on removal procedures, and expert horticulturalists are also being consulted.

“We will take every step we can to save the Toomer’s oaks, which have been the home of countless celebrations and a symbol of the Auburn spirit for generations of Auburn students, fans, alumni and the community,” said University President Jay Gogue.
Gogue asked members of the Auburn Family to “continue to be ‘All In’ in upholding its reputation for class” and not allow anger to be expressed inappropriately or undeservedly.
“It is understandable to feel outrage in reaction to a malicious act of vandalism,” Gogue said. “However, we should live up to the example we set in becoming national champions and the beliefs expressed in our Auburn Creed. Individuals act alone, not on behalf of anyone or any place, and all universities are vulnerable to and condemn such reprehensible acts.”

Because the application of the herbicide is being investigated, no details about the investigation can be released. Anyone with information can contact the Auburn Police Division at (334) 501-3110 or anonymously by voice or text on the tip line at (334) 246-1391.

UPDATE...An arrest has been made...62 year old retired state trooper/Alabama fan Harvey Updyke was arrested Thursday morning and his bond was set at $50,000! Let's all say a prayer that this poison did not get into the water system...I have told Mary Claire to only drink bottled
water until we know for sure the water is safe.

I will be out of town for the next few days with my mom...Take
care and I will ya soon!

This is what Toomer's Corner looked like after we WON the
BCS National Championship Football Game
this year...WAR EAGLE!!! 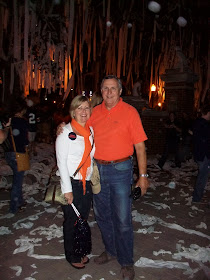 Here we are having fun after one of our
games this year!
Second UPDATE as of Monday 2/21/11...my daughter just sent me this pic that she made
on her way to classes today of our Toomer's trees...how sad that they are having to put
up a wall around our beautiful oaks...I sure hope that they can be saved. Friday I left for
my trip with my mom and I found it really strange that I got several comments from Alabama
fans about my National Championship/Toomer's Corner T-shirt that I was wearing...I got
the shirt last month when I was in town for the celebration party...didn't really think much
about it when I put it on Friday morning until people where stopping me in restaurants with
their comments. I'm hoping that maybe something good can come out of this awful act of
behavior. 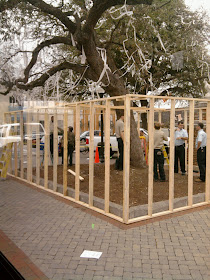